“So much of what’s out there is just propaganda!” 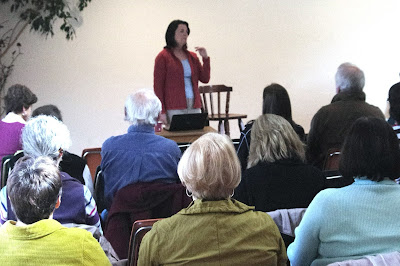 That’s what a local doctor told Lt. Governor Elizabeth Roberts at the April 13 forum on affordable health care, organized by the Charlestown Democratic Town Committee and held at the Cross Mills Public Library. He commended Liz Roberts for her leadership of Rhode Island’s efforts to put the new Affordable Health Care Act into practice and urged her to educate the public about what it will do – and won’t do.

Lt. Governor Roberts mostly took questions and provided straight-forward, substantive answers during the nearly two hour session. She noted that though the new law is federal, how it’s put into play is largely decided in each state. She also debunked, right from the start, the myth that so-called Obamacare is “socialized medicine,” pointing out that it’s really the opposite. It works to coordinate the existing patchwork system of health care financing that rests largely on private insurance, plus federal Medicare and the state-federal Medicaid program so that it works more efficiently and covers more people.

Lt. Governor Roberts has been named by Governor Chafee as the leader of one key part of the affordable health care program, the “health care exchange.” This program is actually modeled after the program that has been operating in Massachusetts for the past six years – ironically, a program that was a compromise between then Governor Mitt Romney and the Democratic leadership of the Massachusetts legislature. She said that “health care exchange” was actually a misleading title because what it really offers is “an on-line marketplace.”

Rhode Island is signing up health insurers who will then offer citizens choices of plans, prices and menus of covered services (though the federal law sets minimum standards of coverage). Starting in January, the exchange should be up and running. Low-income people, especially low-wage workers, have been priced out of the market, but will now be eligible for subsidies that will make health insurance affordable (i.e. no more than 10% of a person’s income). 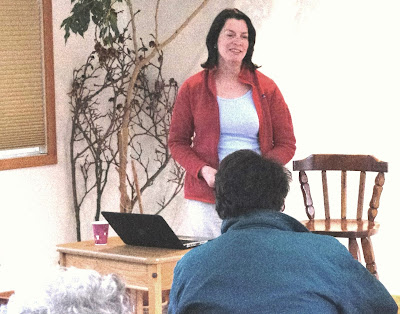 The first parts of Obamacare have already gone into effect. They include preventing health care plans from denying coverage to people with existing conditions, and allowing young people under 26 to be covered under their parent’s family plans.Phasing out the Medicare prescription coverage “donut hole” that has burdened seniors and the disabled with major drug costs has begun. The first year of the phase-out of the “donut hole” has put an estimated savings of $8 million back into the pockets of Rhode Island’s senior citizens.

Lt. Governor Roberts dispelled the myth that you will have to give up your existing insurance coverage. You are free to stay where you are, unless your coverage is unaffordable – as is the case for many low-wage workers, such as those who work for Wal-Mart or fast food companies. If your insurance costs more than 10% of your income, you can use the health care exchange to get better coverage and, depending on your income, a federal subsidy to ensure that the coverage is affordable.

For the first time, there will be coverage for adults without children with incomes up to 130% of the poverty line. Subsidized coverage will be available on a sliding scale up to 400% of the poverty line.
The new program gives small businesses an option to participate and promises better coverage at cheaper rates because of the leverage the state will have to bargain with carriers.  There is also a new tax credit program for small businesses and a subsidy program for small non-profits that add insurance coverage for workers.

Lt. Governor Roberts also stressed that the new law not only means more people can get health insurance but also provides the state with an opportunity to change the way we look at the health care system. “How do we pay for outcomes not just services?” She said we need to look for better ways to get healthier communities.

One member of the audience said she read a book that said that under Obamacare there won’t be any coverage for cancer care once you reach the age of 76. Not true, said the Lt. Governor, noting that the education program for what’s really in the new law will launch on June 1st.

Responding to an audience question, the Lieutenant Governor said that the current estimate for the number of uninsured Rhode Islanders is 110,000 people. She said that about 30,000 of those people are already eligible for Medicaid, but have not yet applied. She estimates another 40,000 of the 110,000 uninsured will become eligible for coverage when Medicaid expands.

All told, she estimates that at least 80,000 of the 110,000 currently uninsured will be able to get affordable health care coverage under the new program.

Dave Henley, a manager at the Wood River Health Center, asked Ms. Roberts about the potential for a repeat of what happened when the Massachusetts law kicked in. It was so popular and brought health coverage to so many new people that doctors’ offices were swamped with people who had not seen a doctor in a long time.

Lt. Governor Roberts said that while there could be a big spike in demand on services when previously uninsured people get coverage, that Rhode Island is a leader among the states in having extensive primary care services. She said that it will certainly be “challenging” to adjust and change, especially since the health care industry is currently around 20% of the state’s total economy. In particular, Rhode Island law permits Nurse Practitioners more flexibility, than Massachusetts, to provide primary care. A doctor in the audience spoke up to praise the capabilities of nurse practitioners.

Several members of the audience raised fears that some employers will start cutting back workers’ hours and change their status from “full-time” to “casual” to avoid having to provide real health insurance coverage. Many such employers offer high-cost, high-deductible insurance with a limited scope of services, and these types of plans will not meet the new standards under the law.

But Lt. Governor Roberts said that employers will not be able to dodge their legal or moral responsibilities so easily, and that all employees, including part-time or so-called “casual” workers, will be part of the tally when large employers’ responsibilities are assessed.

Her office is working with the state Division of Elderly Affairs to make sure that SHIP Counselors (SHIP stands for “State Health Insurance Plan”) fan out to local communities to sit down and talk to elderly Rhode Islanders about Medicare, health insurance and their health care needs.

Not every question has an answer yet, said Ms. Roberts, and some problems and concerns are still being worked out. As an example, she said her office is still working with state labor unions whose members are covered by multi-employer insurance plans to avoid coordination problems or potential conflicts. She is also confident that the roster of insurers who will be included in the state’s health care exchange will grow to the level where it will lead to healthy competition.

The Lieutenant Governor suggested that if you want a preview of what Rhode Island’s health care exchange will look like after its January roll-out, you can go to the Massachusetts “Health Connector” website (click here).

Lieutenant Governor Roberts’ own website on health care reform is also well-stocked with useful information about what’s happening now and what will be coming. Click here.

Click here to read the Westerly Sun's coverage of this forum.

We had the entire program video recorded. It will be shown on Cox public access channel 18 and is also available here: http://vimeo.com/63983769. Or just click below.