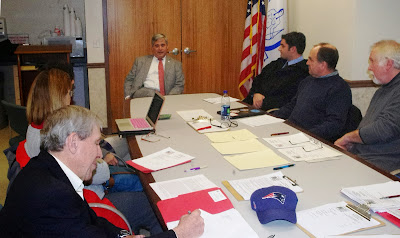 The Charlestown Democratic Town Committee (CDTC), by a unanimous vote, endorsed Attorney General Peter Kilmartin in his quest for the state Democratic nomination in his bid for a second term in office. Charlestown is the first local Democratic committee in the state to endorse Mr. Kilmartin for re-election.

Mr. Kilmartin told the committee that he is determined to leave the Attorney General’s office better off than he found it and pointed to his work during his first term. In addition to a long list of successful prosecutions as the state’s principal criminal prosecutor, Mr. Kilmartin has improved the office’s efforts on consumer protection, dom
estic violence and open government.

Attorney General Kilmartin grew up in a working class Pawtucket neighborhood and went into the Pawtucket Police force as a patrolman. Over 24 years, he worked his way up the ranks to become a police captain. He also went to law school and earned a law degree.

He ran for Attorney General in 2010 after serving ten terms in the RI House of Representatives.

Rep. Donna Walsh (D-District 36) pointed out that among his many achievements, one in particular was of special interest to Charlestown. After the tragic May 2010 death of Colin Foote of Charlestown, struck down by a frequent and chronic dangerous driver, then Rep. Kilmartin was essential in helping Rep. Walsh win enactment of the Colin Foote Law. That law makes it less likely that persons like the one who killed Colin Foote will be allowed to stay on the road.

CDTC Chair Catherine O’Reilly Collette said “Attorney General Kilmartin has demonstrated his dedication to the people of Rhode Island in his first term. He has earned our trust and admiration so we are pleased to be the first municipal Democratic committee to endorse him.”

For the second year, the Charlestown Democratic Town Committee (CDTC) has teamed up with Operating Engineers Local 57 to collect Christmas gifts for South County children who would otherwise get nothing for Christmas.

The children are under the supervision of the RI Department of Children, Youth and Families, range in age from infants to young people about to “age out” of the program when they reach age 18.

At the urging of his wife Bev, CDTC Vice-Chair Tim Quillen got his union involved and then the CDTC. Bev Quillen is a high school teacher and advisor to her school’s community service club. They aimed to reach those children who were not served by other holiday programs, such as young girls under DCYF care who had babies of their own.

Armed with lists with the first names of the children, their ages and their Christmas wish lists, CDTC members proceeded to collect or buy what the children needed. In most instances, the children’s wish lists focused on necessities such as clothes and toiletries; toys were, in many cases, more like an afterthought.

Tim Quillen reports that town Democrats and Local 57 members, aided by town employees, friends and neighbors, not only fulfilled completely filled the wishes of every assigned child, but had enough extra to provide even give many more DCYF children an unexpected Merry Christmas.

“In a state with an unemployment rate at 9 percent, this benefit cut is unacceptable,” said Langevin. “Our state is starting to show the signs of economic recovery, but that process has been a slow one, and cutting unemployment insurance would be a step in the wrong direction. I urge Speaker Boehner and my colleagues in Congress to bring this issue to a vote so we can extend this relief on which so many families rely.”

WASHINGTON, DC- Congressman Jim Langevin (D-RI) issued the following statement today in response to House passage of H.J.Res. 59, the Bipartisan Budget Act of 2013:
“This budget compromise represents a small, but important, step towards returning to a regular budget process.  Our nation has suffered for far too long as the Republican leadership governs by crisis. I’m pleased we were able to roll back some of the most harmful cuts imposed by sequestration and temporarily avert a scheduled cut in Medicare physician reimbursements.“

“However, I am deeply disturbed that House Republican Leaders refused to allow a vote to extend unemployment insurance for 1.3 million Americans, including 4,900 Rhode Islanders, who will be cut off from federal emergency unemployment compensation in the middle of the holidays.

"Unemployment insurance provides vital assistance to those struggling to find jobs during a difficult economic recovery.  That is why I joined 173 of my colleagues in calling on Speaker Boehner to prevent Congress from leaving for the year without addressing this critical issue.

"Democrats put forward a three-month, fully paid-for, extension of unemployment insurance, and it is unconscionable that Republicans did not allow a simple vote to include it in the budget with so many families facing financial uncertainty.”

WASHINGTON, DC - Rhode Island Congressmen Jim Langevin (D-RI) and David Cicilline (D-RI), who both serve on the House Gun Violence Prevention Task Force, described a Federal Bureau of Investigation report, released by Mayors Against Illegal Guns, as a call to action. The report illustrated Rhode Island’s failure to submit health records of individuals barred from purchasing handguns to the National Instant Criminal Background Check System (NICS). Rhode Island ranked among the lowest-performing states in the country, submitting fewer than 100 mental health records since the inception of the database under the Brady Handgun Violence Prevention Act twenty years ago.

The Brady Handgun Violence Prevention Act of 1993 requires an individual to pass a background check through the NICS database before purchasing a firearm from a federally licensed dealer, a process that typically takes 90 seconds. Data released last month by the FBI, reflecting record submissions as of May 2013, shows that the NICS remains incomplete, with hundreds of thousands of state and federal records missing. According to the report, the omission of mental health records in the NICS has created dangerous information deficiencies.