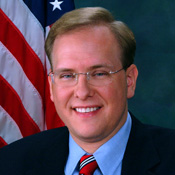 Congressman Jim Langevin (D-RI) met with President Barack Obama and the House Democratic Caucus Wednesday afternoon to discuss a resolution to the government shutdown and the upcoming debt ceiling deadline. The House will meet over the weekend as Democrats continue to push for a clean continuing resolution to fund the government and a clean increase in the debt limit to prevent the United States from defaulting on its debts.

"These are challenging times, but I believe that we can find a solution without further jeopardizing our economy or the full faith and credit of the United States," Langevin said. "The President is committed to reaching an agreement, and I feel strongly that there is bipartisan support for a simple and straightforward bill to reopen the government if Speaker Boehner would allow an up or down vote in the House. The piecemeal funding measures we have seen over the past week are transparent attempts to mitigate the political fallout over the shutdown, but they have only stood to prolong this manufactured crisis that has very real consequences on our economy and on the American people."

Democrats have made repeated attempts to bring up for consideration a continuing resolution that is not tied to the Affordable Care Act, but House Republican leadership continues to thwart these efforts. A continuing resolution would reopen the government, putting hundreds of thousands of federal employees back to work, resuming critical loans to small businesses and ensuring that Americans can access government services and benefits without delay or interruption.

"I have heard, over and over, a Republican battle cry that we are not willing to negotiate. That is patently false. We have compromised. Now, it's the Republicans' turn," Langevin said, referencing the Senate-passed continuing resolution that represents $217 billion less in discretionary spending than President Obama's original budget proposal. "Enough is enough. The Affordable Care Act is the law of the land, and it is time that Republicans stop using it as a bargaining chip. The budget and health care reform are separate issues, and right now we must focus on passing a bill that will get the government back to work.”

“Just as importantly, we must address the impending debt limit, as a failure to quickly do so will wreak untold havoc on not only America’s economy, but the world’s as well,” Langevin continued. “Once those urgent issues are addressed, my Democratic colleagues and I would welcome taking the next step of sitting down and negotiating a host of other issues, including our long-term budget priorities, tax reform and potential improvements to our health care system.”