We really HAVE come a long way

March is Women’s History Month and a fine time to mark the progress women have made in Rhode Island politics over the past century.

In 1922, only two years after the US Constitution was amended to give women the vote, Rhode Island elected the first woman to the Rhode Island Legislature. She was Isabelle Ahern O’Neill of Providence and was elected to the House of Representatives and then the RI Senate where she served until 1934. She fought for pensions for widows and helped to create a Rhode Island Narcotics Board which was a model for its time.

She was quoted as saying “I will not wear a hat to session nor do I want the men to stop smoking or stop doing anything they normally do….I want to be treated the same.”

Ms. O’Neill began her career as an actor and orator, perfect skills for political life. She served in the state legislature until she was recruited to work in the Roosevelt Administration where she worked until 1943, whereupon she came back to Rhode Island to work in the state Labor Department. She lived to age 94 and died in 1975. 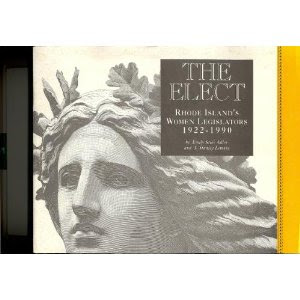 There is an interesting biographical sketch of Ms. Schlesinger in The Elect: Rhode Island’s Women Legislators, 1922-1990 by Emily Stier Adler and J. Stanley Lemon. She grew up in a wealthy family but defied them to marry Charles Schlesinger in 1903. The family disapproved of Charles because he was Jewish, even though his family were wealthy and successful investment brokers in New York.

They moved to Charlestown where Charles served on the Charlestown Town Council and as Town Treasurer, cleaning up the town’s messy finances and helping Charlestown to become the only Rhode Island town to clear up its debt.

When her husband died in 1915, she grew to be friends with Dr. Milton Duckworth who was described by Adler and Lemon as Charlestown’s Republican “boss”. Duckworth helped to propel Ms. Schlesinger into politics. He was a notoriously hard-nosed character but was a good friend to Ms. Schlesinger.

Even before suffrage was passed in August 1920, Ms. Schlesinger won election to the Charlestown School Committee in 1916. When she ran for State Representative, Charlestown was a safe Republican district. She did not campaign but still won with 76% of the vote.

When she moved on to become the state’s first woman Senator, she said “I shall not be the last by any means….There will be many more like me down through the years.” She was pushed out of her seat in 1930 when a man, Cleveland Carpenter, decided he wanted the nomination.

During her time in the state legislature, she and Democrat Isabelle O’Neill were the only two women. While they did not have a particularly overt alliance since they belonged to opposing parties, they both pushed a social feminist agenda that at the time was quite progressive.

Ms. Schlesinger, as a member of the Republican majority, had more success at getting bills passed, such as lifting the ban against women serving on juries, banning child labor in street trades, and bringing Rhode Island under the protection of federal infancy and maternal protection law.

Though her career in the legislature ended in 1930, Lulu Schlesinger stayed active in politics nearly all her life as a Republican State Committeewoman until 1950. She died at her home in 1956.

After Lulu Schlesinger, it took another 42 years before Charlestown elected another woman to the legislature when it sent Lucy Rawling Tootel (R) to the House of Representatives in 1973. Click here to see the list current to 2010.

The third and only other Charlestown woman to serve in the General Assembly is my friend Donna Walsh (D) who was elected to the Senate in 1996. After serving on the Charlestown Town Council for four years, Donna returned to the legislature as a State Representative in 2006 where she serves today.

In 1978, Donna’s public service career began when she became active in Charlestown over the successful fight to stop the building of a nuclear power plant in what has since become Ninigret Park and National Wildlife Refuge.

Donna was also the Cross Mills Library board chair, president of both the Chariho and statewide Business and Professional Women and active in numerous other groups.

Elected to the Town Council twice, the RI Senate and then the House, Donna used her considerable energy and determination to champion environmental, economic and women’s issues.

I first met Donna when I lived in Washington, DC. I was Director of the Women’s Rights Department at a national union that was in the vanguard in the fight for pay equity for women. Donna was one of the key leaders on that issue here in RI.

She never gave up on any cause she believes in, and is so generous to other women. In fact, in this and other ways, she reminds me of one of the most influential women in my life.

I had the privilege to have had as a mentor and a friend one of the most influential women in modern Rhode Island history, Eleanor Slater. We met in 1967 when I was at Rhode Island College and she was representing Warwick in the RI Senate. I was the only woman page in the Senate and she was one of only two women Senators.

Senator Slater befriended me, showed me the ropes and encouraged my interest in politics. When she left the Senate in 1969 to become director of the newly created Division on Aging, she offered me a job. It was the first stepping stone in my career and I’ll always be grateful.

Eleanor Slater was a powerful figure in both the state and national Democratic Party. While in the state Senate, she passed the nation’s first fair housing law (the Slater Act). It took her seven years, and she famously chased a male colleague into the men’s room to get his vote. She was a leader on issues of mental health, the elderly and equality for women and people of color.

She was also one of the most interesting people I’ve ever met. When she was in her early 70’s, she went on a white water rafting trip down the Colorado River in the Grand Canyon. Her raft hit a rock and she was thrown into the rapids. She reported later that it was exciting and she was glad that she was a strong swimmer.

Eleanor Slater also had great political instincts. Around 1974, she got a pamphlet in the mail from an unknown Governor named Jimmy Carter saying he was running for President. She called him up, liked what he stood for and became a Carter delegate to the Democratic Convention in 1976 where he won the nomination and then the Presidency.

As a state committeewoman, she only missed one Democratic National Convention from 1952 to 1996.
When she retired from the state in 1976, she went back to school to get a college degree, graduating with a BA in Political Science at age 70.

Throughout her career, she always keenly felt an obligation to reach back and help other women up the ladder, a quality that Donna shares.

Eleanor Slater was a ground-breaker for women in politics, like Isabelle O’Neill and Lulu Schlesinger. They all understood the political fact of life that “all politics is local,” so if you want to make a difference, you can start by getting involved where you live.

On the local level, even though women won the right to vote in 1920, it also took Charlestown a very long time to elect its first woman to the Town Council. That happened in 1976 when Ellen Ennis was elected.
Since then, 18 other women have served one or more terms on the Council, including among them Donna Walsh, Deb Carney, Marge Frank, Evelyn Smith and now Paula Andersen. Click here to see the entire list.

Though Rhode Island has elected a few women to statewide office or Congress, we still have never elected a woman as Governor, even though we have had some truly amazing women leaders in state politics.

Women know that equal rights and political power don’t come easy, and not without a fight. From suffrage to today, it has been a struggle. If you want to make a difference through the political process, the best advice I can give is to follow the lead of the women who have come before us. Come and join the Town Committee. Volunteer for a town commission. When you’re ready, consider running for Town Council or Planning Commission or School Committee.