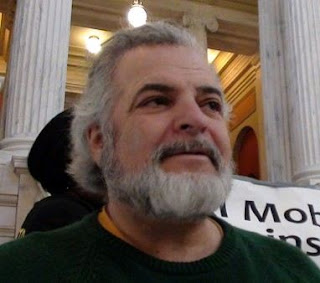 The Charlestown Democratic Town Committee (CDTC) is proud to endorse Robert Malin for the Charlestown Town Council. CDTC Chair John Hamilton said "Robert is a leading environmentalist in Rhode Island and his values are perfectly aligned with Charlestown's rural character."

Robert said "If we want to protect nature, the public health and have a sustainable future, we have to start by leading the way, moving to a self- sufficient renewable future with appropriate technology; and reestablishing local agriculture while developing aquaculture which were key parts of the traditional Charlestown economy."

After coming here “for a month” to write a performance arts piece, “Celebration of Life,” Robert has lived in Charlestown full time for 19 years. Having been an environmental activist in college and filmmaker, he was enchanted by the unspoiled nature that characterized Charlestown. Robert was hired to produce videos for the fledgling RI Progressive Democrats, he became the State Coordinator, helping to establish their social, economic and environmental justice platform. However, back at home, he began to notice the massive erosion and changes to the ecology an astonishing rate. After attending many symposiums and colloquiums which demonstrated that this was due to the effects of anthropomorphic Global Warming (Climate Change), he became resolved be a part of the solution by seeking ways to help mitigate it’s advance. He worked with the RI Sierra Club on their Fossil Free by 2030 campaign, a partner in passing the landmark Climate Change legislation - the Resilient Rhode Island Act. 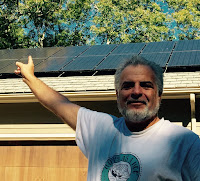 Robert would like to see the Council actively seek for funding to help residents and businesses transition to solar power and explore technologies like geo-thermal and wind in appropriate places (unlike the Whale Rock industrial project in a residential area.) He believes that the Town should set the example by adding renewables to Town buildings and help find funding for Chariho for a full fledged Green Building program. He also believes that Charlestown needs to address water issues instead of “kicking this can down the road.”

Robert is also a firm believer in democracy and social justice. He believes that the states open meetings laws should be strictly adhered to and that diverse opinions need to be considered in a respectful manner. Democrats, Republicans and Independents should all have input rather than one Political Action Committee (PAC) dominating the discussion. He believes that we also need to be mindful of the concerns of our most vulnerable residents and build caring community where the more fortunate contribute more to help neighbors with greater challenges. 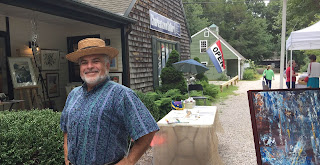 Finally, Robert believes that Charlestown can be an example of an economy that is in harmony with nature. Eco-tourism is a growing area which will attract visitors who will cherish the environment. There are many artists here and the “Chartwalk” (Charlestown Art Walk) is another way that we can support our local businesses and preserve out character. With URI close by, he believes that we can attract start-ups in Clean Green Technology which are needed for a sustainable future.

Charlestown, RI- founded Rhythm System and performed pieces at PPAC Youth in Arts Series. He has also worked as a political consultant and marketing including in the financial industry.
Founded Malin Productions Video Services.

●     Produced successful video pieces for organizations ranging from local Sierra Club chapter and Coalition for Transportation Choices to corporate work. Produced Citizen of the Year and Athena Award videos for the Ocean State Chamber of Commerce
●     Produced the People’s Climate March-News You Didn’t See Documentary and other Documentaries
●     Produced the PEG Award winning One World Show and Our World-The Whole Ecology
●     Produced media for news and worked on Presidential and State Campaigns

COMMUNITY ACTIVISM
Founding member of the Rhode Island Progressive Democrats of America. Advocated for the social and environmental justice both in Washington and at the RI Statehouse.

Political Chair For RI SierraClub – Supervised the endorsement process, lobbied for Sierra Positions at the RI Statehouse, worked with the Environment Council of RI, Direct Action For Rights and Equality and Labor Unions on the Blue Green Coalition.

Founding member of Fossil Free Rhode Island, which advocates to move RI off of fossil fuels as soon as possible to avoid the most devastating effects of climate change. 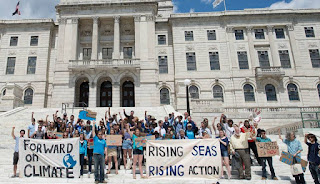